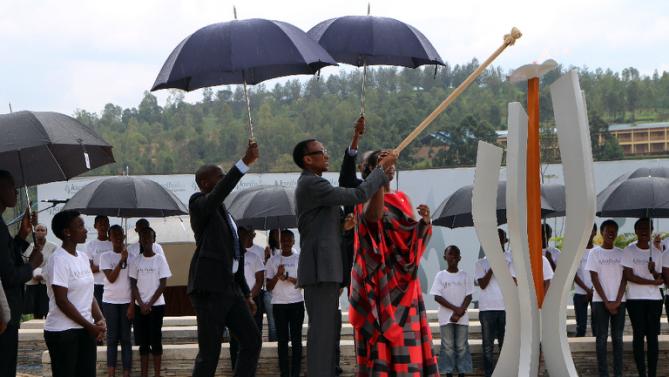 "We are not limited by the routine," said Julienne Uwacu, the minister of Sport and Culture, which helps organize the commemoration. "We decided to shift from the stadium and to go down at the grass-roots level."

The Rwandan genocide started April 7, 1994, after then-President Juvénal Habyarimana's plane was shot down. Almost immediately, violence broke out as the majority ethnic Hutus targeted the minority Tutsi population and others. By July, more than 800,000 people had been killed.

Rwandans gathered in thousands of villages across the country to observe the anniversary, Uwacu said. Throughout Kwibuka — as the commemoration is known — there will be meetings, lectures and support groups.

This approach is a stark contrast to last year's 20th anniversary, which brought a flood of dignitaries, including United Nations Secretary-General Ban Ki Moon and top American officials, to the 30,000-seat stadium in Kigali.

Tuesday's ceremony was held across town at the Kigali genocide memorial, where Rwandan President Paul Kagame spoke to a crowd of a few hundred people.

As a light rain turned to a steady shower, the Rwandan leader lit a flame in honor of those killed. "Imagine people hunting down their brothers and sisters," Kagame said, standing not far from the grave where a staggering 259,000 victims are buried. "We were bruised, but we are still standing, and we are not going anywhere."

The rest of Kagame's televised address struck an equally defiant tone. Speaking about "injustices" perpetrated against Rwanda, he was critical of the international community's stance toward the country, which he characterized as inconsistent — especially in regard to rebel groups in neighboring Congo.

The commemoration started to take on a new form in 2012, when the government decided not to hold events at the national stadium as frequently. Refuting that the change was because of budgetary pressures, officials framed the move as a way of bringing Kwibuka closer to the people.

"We don't have citizens who are located permanently in the stadium," Uwacu quipped. Still, the ceremony will return to the stadium every five years — next in 2019.

The flame of remembrance will continue to burn for each of the 100 days of the genocide. As the country mourns, Kagame pointed out how far Rwanda has come.

"This country has changed," Kagame said. "Rwanda has changed for good and forever."