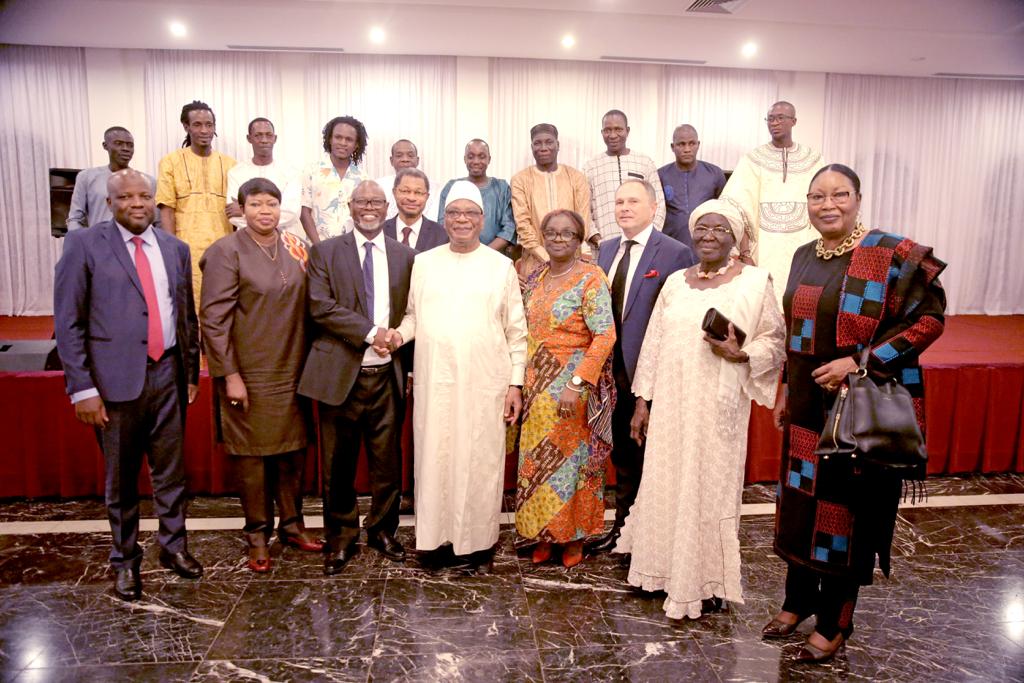 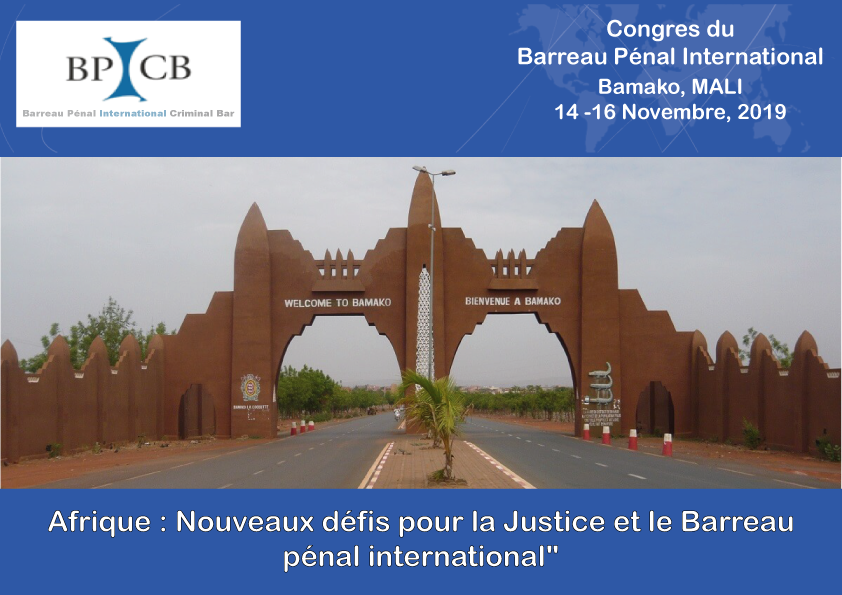 You are cordially invited to take part in the 1st congress of the International Criminal Bar in Africa from November 14 to 16, 2019 at the Hotel Sheraton in Bamako - Mali.

For Malian lawyers, please register at the secretariat of the Order or with Maître Maîmouna TOGOLA, President of the Finance Subcommittee of the Congress Organizing Committee.

You can register now by clicking on the link below.

Iraq: the International Criminal Bar Association develops a project on  crimes against women committed by ISIS

An interview with Laura Guercio, lawyer and member of ICBA

“Recently, the Executive Committee of the International Criminal Bar Association (ICBA) approved a project aimed at investigating, gathering evidence and reporting on crimes committed by members of the Islamic State (Daesh or Isis) against women and girls. Victims of violence such as rape, forced marriages, torture, all committed in order to enslave women and girls, but also to destroy and destabilize an entire community," explains the lawyer Laura Guercio, recently appointed as head of this project, and already in charge of other roles as Italian agent at the Management Board of the European Fundamental Rights Agency in Vienna; "women in conflict situations, are often the victims of sexual violence also for their role as mothers and, then, guarantors of the continuation of a community. By hitting women, the community itself is hit. This dramatic reality has been increasingly dealt with by the international community, trying not only to protect women as passive victims, but also, over time, to recognise and promote their role as active and essential agents for guaranteeing peace and security. To this end, I recall UN Security Council Resolution 1325, which marked a turning point in international sensitivity and attention to the role of women as active players in conflict and post-conflict situations”.

The ICBA is an international association of lawyers chaired by Prof. Dragos Chilea, which operates in various areas of international law with particular attention to the protection of fundamental rights. All professionals involved in this project will start working from September 2019. In the team of local experts there are University professors, judges, lawyers, psychologists and doctors who will be supported by as many international experts with the sole purpose of supporting the work on site.

"The project will be carried out in two phases: one of investigation activities, data collection of crimes committed by members of the Islamic State in Iraq and reporting to national and international authorities, another of study on the Iraqi judicial system, in particular on the Iraqi Criminal Code" Laura Guercio says, recalling that "the UN Security Council,  with its Resolution 2379, established a commission of investigation experts who must gather evidence of crimes committed by Isis. These crimes will then be tried before the iraqi national authorities because Iraq is not a signatory State to the Rome Statute establishing the International Criminal Court (ICC)".

The second phase of the ICBA project precisely aims at analysing the adequacy of the Iraqi judicial system in relation to the crimes to be judged in order to consider a "possible reform of the current national criminal code, with specific reference to certain crimes such as crimes of sexual violence, on the basis of what are the international standards and the results of the international jurisprudence of the International Criminal Courts" Guercio intervenes quoting the Akayesu case, when in Rwanda in 1994 there was a first conviction for genocide.

By ascertaining the  serious stacks committed by the Islamic State,  is it possible to give hopes to the victims. In what way? "First of all, by investigating activities  which may lead to the discovery of serious crimes that must  be reported and historically remembered. Women are not always in a position to denounce. Secondly, through the reporting activity that will aim at making the crimes committed against women by the Isis  internationally known. Thirdly, by giving support to possible hypotheses of reform of the Iraqi penal system".

Muslim law based on the Koran is not always clear in its rules and must often be interpreted by attentive jurists who are aware of their role. It is widely used in non-democratic governments to reduce the rights of the accused in the trial, prosecute oppositions and dissidents with punishments that do not meet the common rules.

Amnesty International's Annual Report 2017/18 referring to Iraq confirms "The Isis has committed serious violations of international human rights standards and international humanitarian law constituting war crimes. It forcibly displaced thousands of civilians, pushing them into areas of open conflict and using them as human shields to cover its fighters. The Isis deliberately killed civilians trying to escape from the fighting, leaving their bodies hanging in public areas, as a warning against any other escapes. The Isis fighters carried out killings comparable to executions of people perceived as their opponents and recruited and deployed child soldiers in the field. According to data released by the United Nations in October, up to 1,563 yazidi, women and children were still prisoners of ISIS, trapped between Iraq and Syria and subjected to rape and other forms of torture, aggression and enslavement.

Crimes perpetrated against children and women, often referred to as weak subjects, are typical of a distorted rule of law devoted to violence. The perpetrator, in this case the Islamic State, condemns this weak subject and makes him an accomplice to his barbarity, even though in fact, when manipulated, he acted contrary to his own mental state only because it seemed to him that there was no alternative. This is how incitement to hatred inhibits the free choice to act and neutralises personal identity with extreme ease.

And there is much to reform in international criminal justice, starting with the culture of justice which while being a political issue must not make policy or respond to political needs, as also emphasized by Guercio. "Justice  is a political question in the broad sense because it also has a function of re-socialization of a community structure: this means compensating the victims, condemning the perpetrators, but it also means contributing to the reconstruction of a social structure", the lawyer  goes on to point out the importance of the timeliness of international justice and recalls, to this end, cases such as the Kosovo conflict in which the international legal system has yet to intervene operationally "Justice must be immediate, timeliness. It is not possible to have trials that begin twenty years after the end of a conflict". Then Guercio underlines a relevant question: “WHEREAS justice must always be given to the victims, when justice is not timely, can such a delay cause social damage? If international criminal justice begins after twenty years, it could affect a social structure which, in the meantime, is trying to find its own balance and civil coexistence: then what happens when trials are opened? Is there not a risk that new social conflicts may reopen? It is necessary, I would say essential, that justice be as prompt as possible, both to give immediate satisfaction to the victims and to avoid that delays  negatively affect the current social structures by reopening dramatic crisis and lacerations already existed in the past".

One should then take into account not only the social damage that is created by reopening painful wounds given by a past conflict, but also understand the point of view of the subject himself traumatized by the events that in order to evade the suffering caused by that conflict (re)will act in a defensive way (I refer for example to the serious consequences triggered in PTSD, Post-Traumatic Stress Disorder). The persistence of memory, without justice and without finding the sense of what happened in a short time, in the long run will annihilate the freedom of everyone to be and to be there.

The root of the banality of evil according to Hannah Arendt is the fact that she has no culture or memory, and that is why in totalitarian contexts it is so easy to subtract the individuality of others. If in the course of history there had been no illusion of confusing universal laws and fundamental rights with the unjust rights of a dictator and his armed group, no crime would have been committed against humanity.

We are pleased to inform you that the next General Assembly of ICB will take place the next 5th of July at 3pm in Paris, at the Maison du Barreau (Ordre des Avocats de Paris), located at 2, Rue de Harlay, 75001, Paris.

ORDER OF THE DAY FOR THE COEX AND COUNCIL MEMBERS MEETING

1.-. Quarterly Report of activities and proceedings (About our activity between March 15th and July 5th).

2.- The situation of the technical secretary.

3.- The situation of the Treasury.

9.- The Project with NNUU about “women victims of Daesh’s crimes giving them historical record and justice” from Laura Guercio (Italy).

10.- A final round of questions and answers.

International Congress of the ICB Mali 2019

Registration for the International Congress of the ICB Mali, 14-15 November 2019 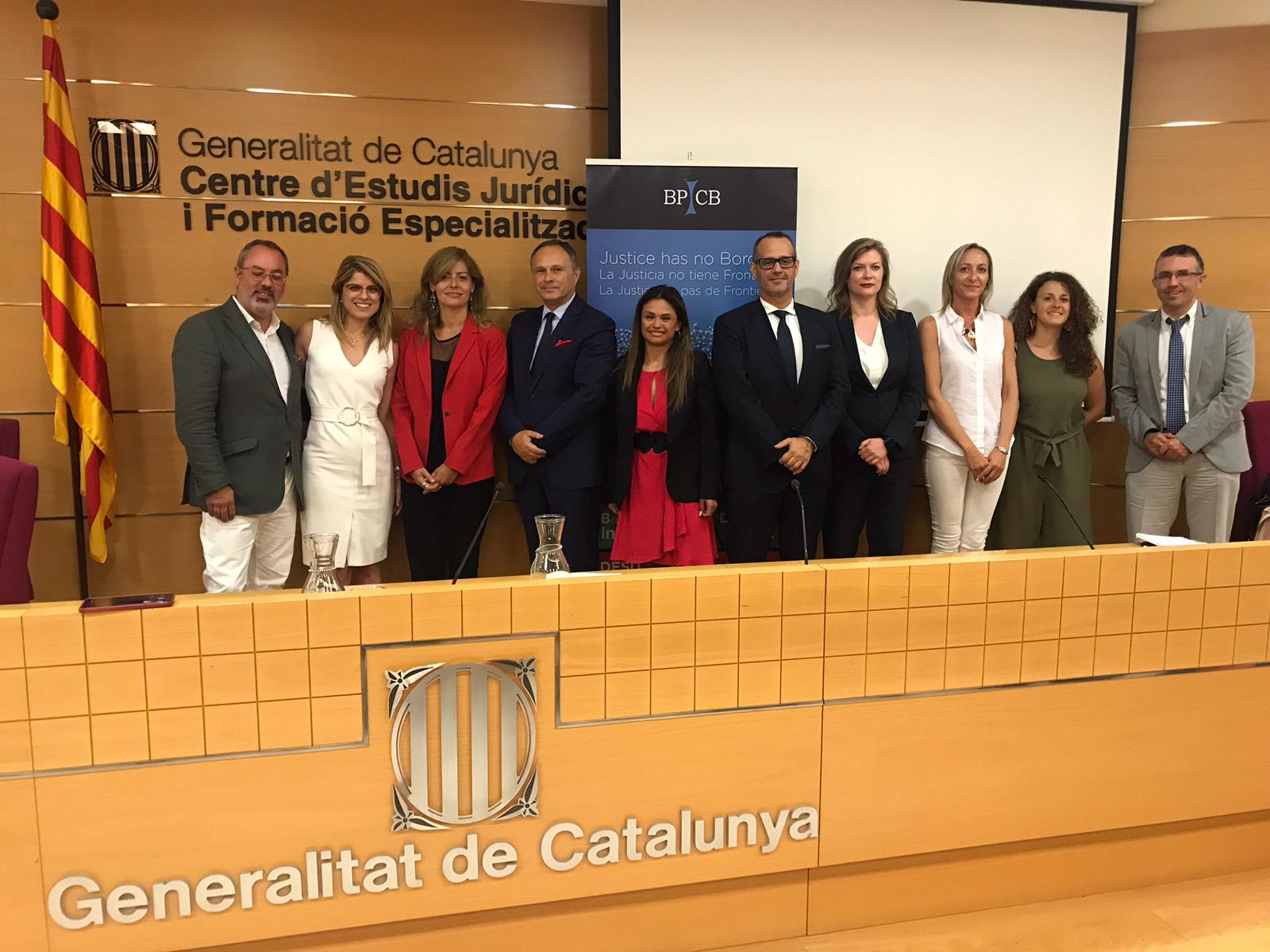 On 17.07.2019, we celebrated together the 12th annual Day of International Criminal Law.

The gathering took place at the Center for legal studies and professional training, belonging

to the Department of Justice of Catalunya.

During a separate ceremony organised at the headquarters of the Bar of Barcelona, Mr.

during the proceedings through the members of its Executive Committee, as follows: Prof.

treasurer, as well as numerous members of the bar. 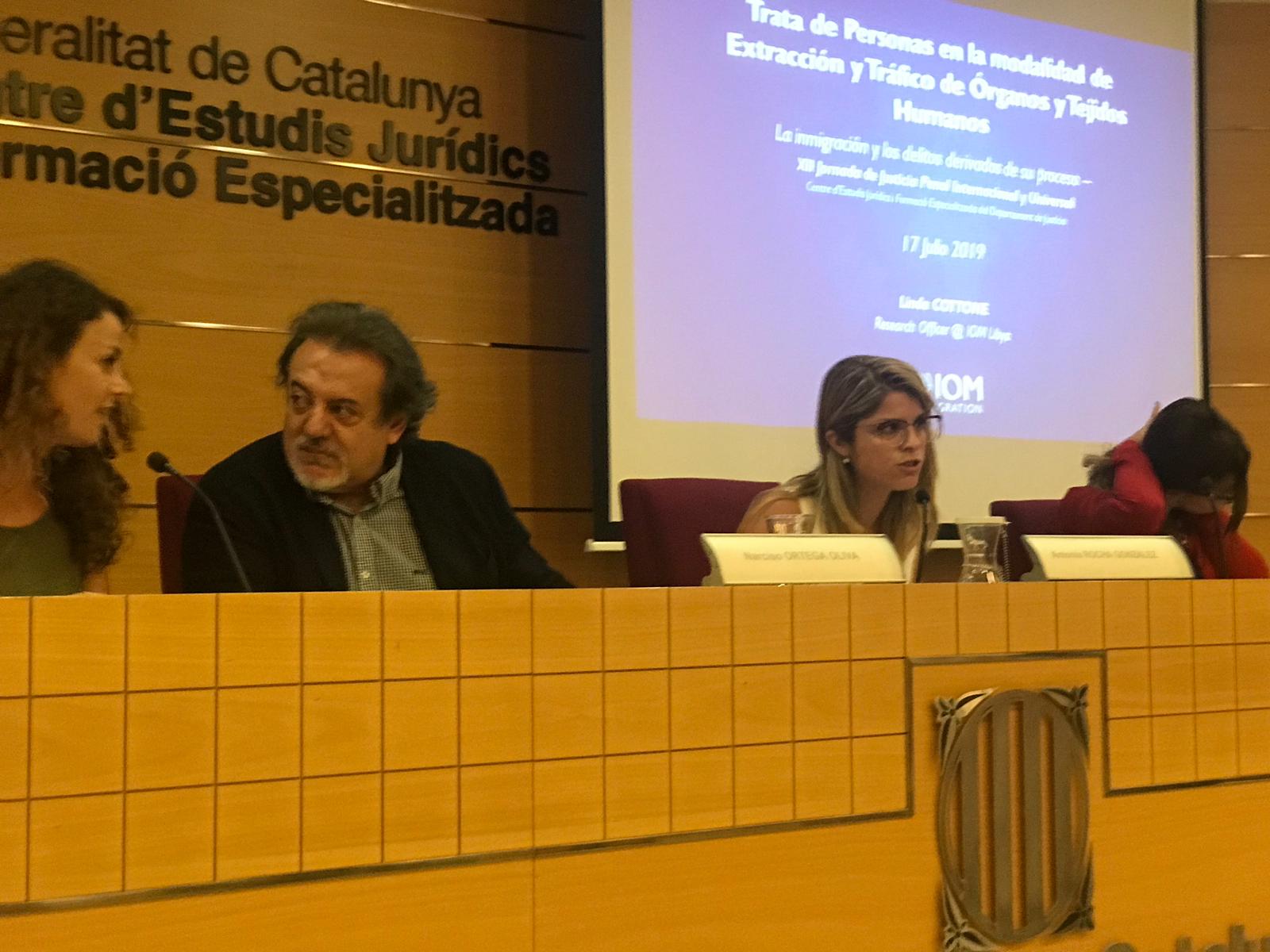 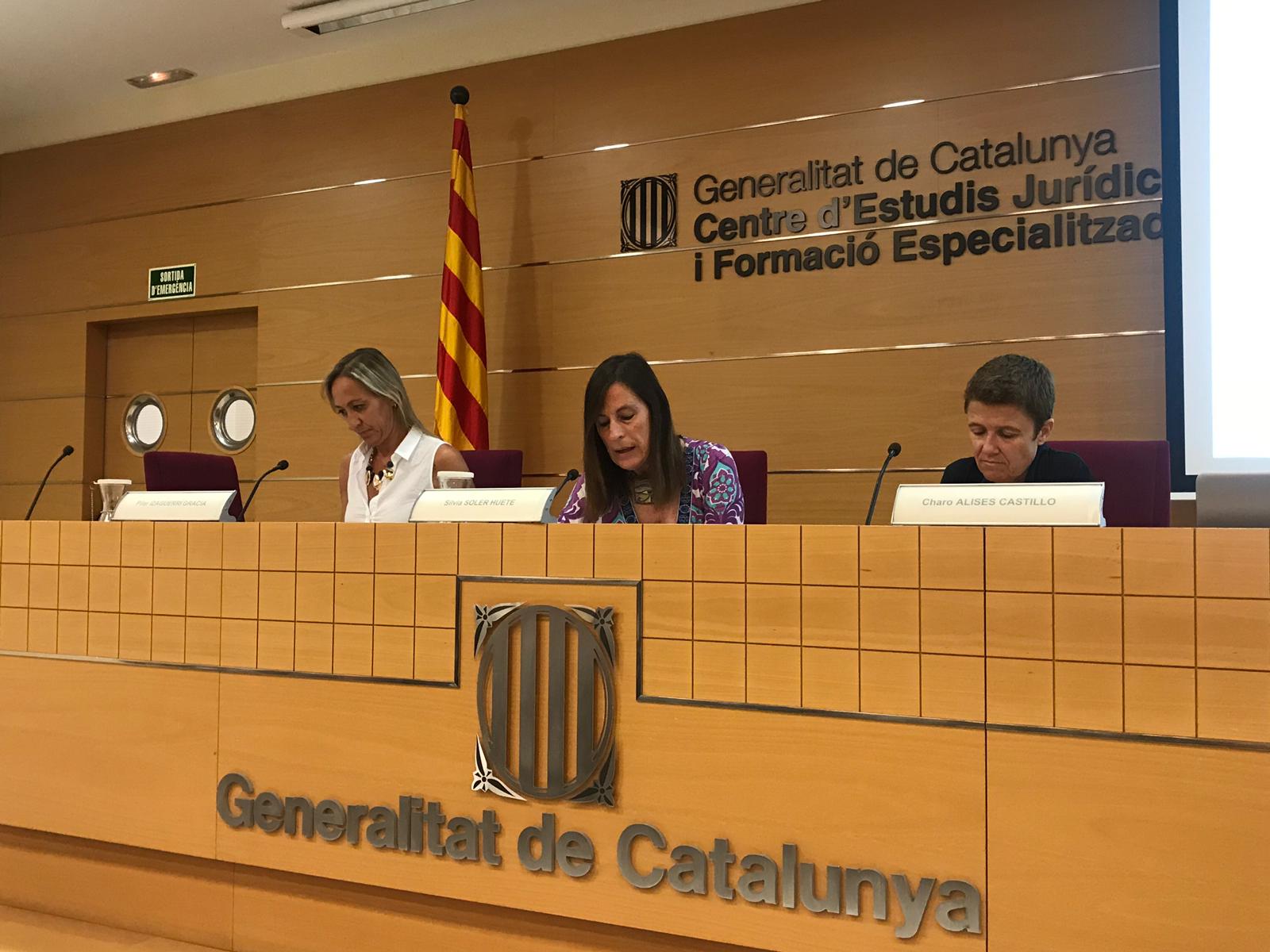 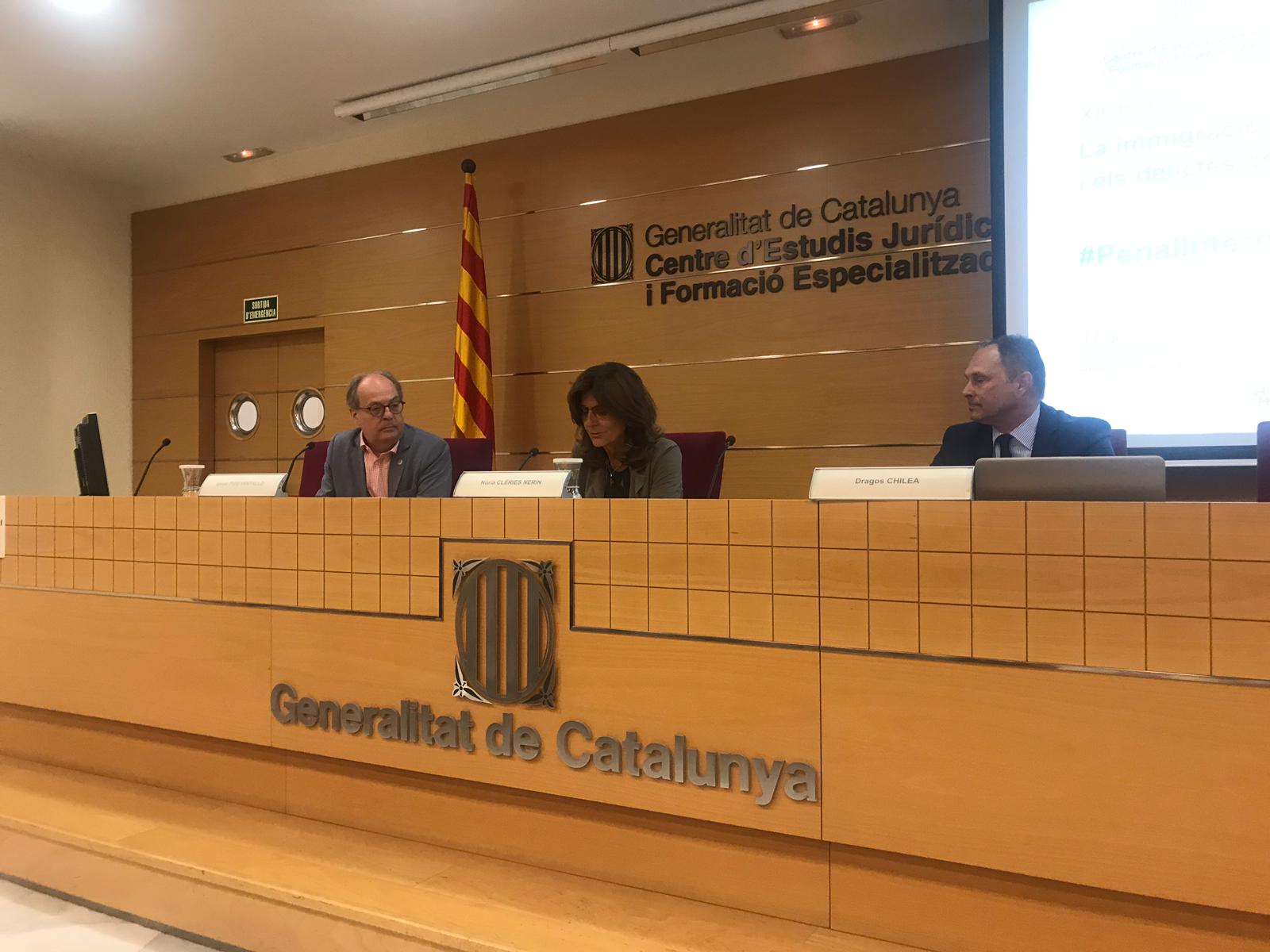