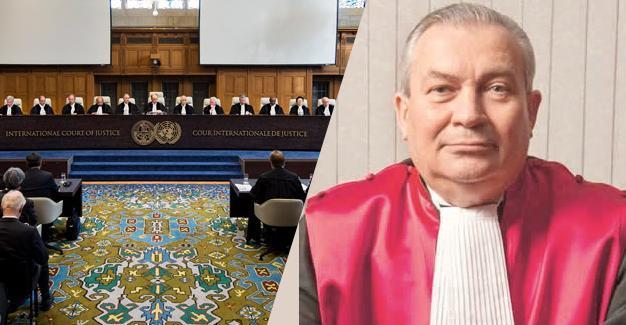 "If States are permitted to take action against a Judge in violation of the applicable international legal framework, judicial independence—a cornerstone principle of the rule of law—and the integrity of our court as such are fundamentally at risk, as is the overall project of international criminal justice." - Judge Theodor Meron, MICT President

Kudos to Judge Theodor Meron for standing up for Judge Aydin Sefa Akay, and more importantly, for judicial independence. Let’s hope his admonitions do not amount to a lone cry in the wilderness of international justice.

How cowardly. Don’t count on the UN (here I am lumping in the Secretary-General, the General Assembly, and, especially, the Security Council) to live up to its obligations and show some backbone – even when failing to do so undermines its legitimacy and authority. All talk, no walk.

Hyperbolic as this may seem, there is cause for international judges to fear that were their heads on the chopping block for running afoul of a national authority for no credible or justifiable reason, they should not count on the immunity accorded to them by the courts they serve – even if those courts were founded by the Security Council. When the going gets tough, international judges should expect the Security Council to throw them under the bus, to distance itself from them, to cowardly abandon them, to relinquish the moral high-ground, to turn its back on judicial independence. Based on what happened to Judge Akay, it can be presumed that judges at the international(ized) criminal tribunals and courts are not shielded from arrest, prosecution, conviction, and loss of their judgeship. Judicial independence before these courts (and other international courts) took a direct hit when the Secretary-General, at the behest of the Security Council, stripped Judge Akay of his judgeship and his immunity.

I do not know, have never met, have never spoken to, nor have ever had any business before Judge Akay. I cannot vouch for his judicial temperament or his knowledge and skills as a judge. For all I know, he could be of marginal aptitude, one of the many (far too many) judges at the international(ized) criminal tribunals and courts who are sub-par, appointed for reasons that have nothing to do with actual qualifications to sit on or preside over highly complex international criminal cases. But this is beside the point. What matters is that Judge Akay is (was) an international judge who enjoyed immunity. And that is a sufficient reason to take notice of what has happened to him and how the Security Council – through its inaction when Judge Akay was first arrested and imprisoned, and now by the non-reappointment – stripped him of his immunity and any vestiges of protection that might make a difference as to whether he ends up spending years behind bars on what clearly appears to be trumped-up charges.

With little regard for due process or the rule of law, Turkish President Recep Tayyip Erdoğan arrested, imprisoned, charged, and tried Judge Akay as part of his widespread and systematic round-up of Gülenists – Fetullah Gülen’s followers, sympathizers, or perceived sympathizers, and supposed coup-makers. With Erdoğan effectively controlling all levels of power, Judge Akay’s future was a forgone conclusion. This is even more so now that Erdoğan has been re-elected with even greater constitutional powers – including powers that allow him to stack and control Turkey’s Supreme Court. Though this is an aside, it is significant to Judge Akay’s fate.

Noteworthy to Judge Akay’s non-reappointment is the basis and evidence relied upon for his arrest. His saga began on or around 21 September 2016, when he was arrested for supposedly being involved in, associated with, or sympathetic to the attempted coup d’état to overthrow Erdoğan’s government. At the time of his arrest, Judge Akay was on the MICT Appeals Chamber of the Ngirabatware case, working remotely from Turkey. Despite not working at the seat of the MICT, Judge Akay enjoyed all the privileges and immunities accorded to him under the MICT Statute.

The damning evidence that led to Judge Akay’s arrest was a book found in his library about the alleged mastermind of the coup, Gülen (considered a terrorist by Erdoğan), and a downloaded messaging app (ByLock), which the Turkish authorities claim has been used by the coup plotters. After spending ten months in detention (prison), he was charged (see here, here, and here) for being a member of a terrorist organization. Unsurprisingly, he was convicted and sentenced in June 2017 to seven-and-a-half years of imprisonment. He has since been provisionally released (see here and here) while his appeal of the conviction and sentence is pending.

When Judge Akay was arrested, the Secretary-General eventually got around to asserting Judge Akay’s diplomatic immunity to the Turkish government (Erdoğan), requesting his immediate release from imprisonment and the termination of all proceedings against him.4 The Turkish government was also invited before the MICT to account for Judge Akay’s arrest.5 Turkey/Erdoğan stonewalled, ignoring both the Secretary-General and the MICT. Ironically, Turkey (under Erdoğan’s watch), was sitting as a non-permanent member on the Security Council when it voted in favor of the MICT’s establishment, and by extension, for the diplomatic immunity that was to shield MICT judges from the sort of arrest, imprisonment, and prosecution suffered by Judge Akay at the hands of Turkey/Erdoğan.

It is chilling enough for the Security Council not to defend against the improper violation of an international judge’s immunity appointed to serve at an international judicial institution that it established. But it is reprehensible and dangerous to then decide not to reappoint that judge, who has had his immunity trampled, civil liberties deprived, and integrity impugned, while his appeal hangs in the balance and where immunity could save that judge from unjustifiable long-term imprisonment.

Yet, the Security Council did just that. It declined to reappoint Judge Akay based on Turkey’s (Erdoğan’s) claims that Judge Akay was no longer qualified to sit as a judge at the MICT because of his conviction. Setting aside the justification for charging Judge Akay and the result-determinative trial that led to his conviction, his case remains on appeal. His conviction is not final. Nonetheless, the Security Council, acting through the UN Secretary-General, effectively abdicated its authority and responsibility by not reappointing Judge Akay.

The Security Council resorts to absurd situational-ethics in its reasoning for Judge Akay’s non-reappointment. Judge Akay resumed his work as a judge at the MICT in June 2017 upon his provisional release subsequent to his conviction. It was not until he was up for reappointment that the Secretary-General (expressing the will of the Security Council) decided that Judge Akay should not be reappointed at Turkey’s insistence. If Judge Akay’s conviction made him unqualified to sit as a judge at the MICT, then how does the Secretary-General account for allowing him to resume his work at the MICT upon his provisional release, which, incidentally, only came about after Judge Akay was convicted? Not to put a fine point on it, in this instance, the UN’s duplicity reflects its lack of appreciation of the importance of meaningfully providing immunity to international judges, and when necessary, intervening on their behalf. Abandoning Judge Akay is a blow to judicial independence.

The UN may not have ushered in an open season on international judges, but it certainly left an ugly and enduring stench in the nostrils of those seeking to promote international criminal justice through courts that are (strive to be), and must be seen to be, beyond reproach. In a letter to the Secretary-General, Judge Meron warns of the potential consequences of acceding to whims and fancies of states who on the one hand ignore international norms provided in a court’s statute, while at the same time cynically invoke selective statutory provisions – as was done by Turkey – to lend credence to their claims:

[T]he situation has raised serious questions as to whether the immunities to which Judges are entitled and the judicial independence that these immunities serve to protect can be effectively guaranteed for institutions such as the Mechanism, where Judges typically work in the countries of their nationality.

…[T]he acquiescence to the position advanced by the Government of Turkey represents a de facto acceptance of a State’s actions undertaken in contravention of the diplomatic immunity asserted by the United Nations, a dangerous precedent to set.

Immunity is vital to ensuring judicial independence. And judicial independence is vital to ensuring that no undue pressures and influences interfere with the course of justice. Granting immunity to judges is not like waving a magic wand, making them impervious to threats, mistreatment, or even arrests. The immunity afforded to international judges is only as good as the political will and moral integrity of the granting authority to uncompromisingly protect it. Failure to do so has consequences: exposing judges to unsubstantiated criminal charges, unlawful arrests, long-term imprisonment, etc. This is what generally happens in illiberal democracies or states governed by authoritarian regimes, where the rule of law is a malleable concept, and where “legality” (perversely interpreting and applying the law to justify unsound predetermined results) is used to imprison political opponents and critics for specious reasons.

Other than Judge Meron, who arguably had an obligation as President of the MICT to raise the matter with the Secretary-General (which he did with sharp and unequivocal eloquence), I am unaware of any concerted efforts by other international judges to press the Security Council to intervene on behalf of Judge Akay.

I had previously warned of the risks associated with Judge Akay’s arrest, calling upon international judges to come to his aid by galvanizing their collective voice through a petition to the Security Council. International judges now have a second chance. Today, it’s Judge Akay; tomorrow, it might be one of them.