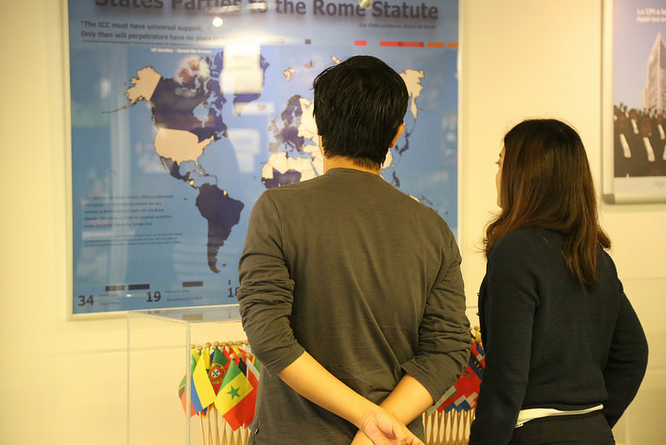 This year's open day event was the last one to take place in the Court's interim premises as the ICC will be relocating to its permanent buildings at the end of this year.

"We were delighted to open our doors to so many neighbours, Hague residents and others interested in the Court's role in the fight against impunity for the gravest crimes," said ICC Registrar Herman von Hebel. "The Hague International Day provides a good opportunity for dialogue and better understanding of our activities, and we look forward to continuing this initiative in our new premises as of next year."

Women, men and children of different ages and nationalities, including Dutch nationals and members of the international community based in The Hague, had the opportunity to participate in a one-hour presentation in the ICC public gallery and engaged with ICC staff representing the Judges, the Prosecution, the Defence, and the Legal Representatives of Victims. Questions from visitors focused on the various aspects of the Court's work, including its mandate, structure and ongoing cases.

The Hague International Day is organised on a yearly basis by the Municipality of The Hague – the Court's host city – and gives the public the opportunity to learn more about the functioning and aims of the various international institutions and non-governmental organisations based in the city. The Hague has been hosting the ICC since 2002. The city and its surrounding area are now home to 160 international organisations.

The ICC is the first permanent, treaty-based, international criminal court established to help end impunity for the perpetrators of the most serious crimes of concern to the international community, namely war crimes, crimes against humanity and genocide.