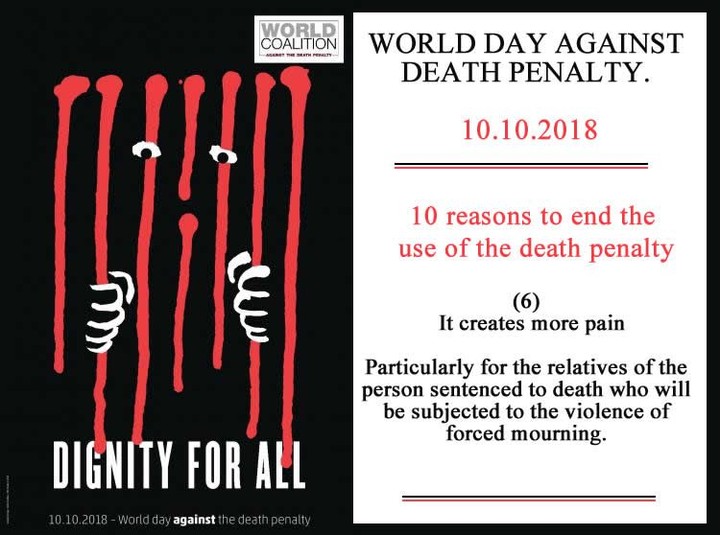 Women and girls have not been necessarily understood as a distinct category of death row population. While they have been executed in significantly smaller numbers than men, their invisibility means that their specific needs are largely hidden, along with the specificities of what brought many of them to death row: multiple human rights violations stemming from gender discrimination.

There are at least 500 women currently under sentence of death around the world, although this is likely a conservative estimate as some states refuse to publish information on their use of the death penalty. This represents under five percent of the world’s death row population, but this average hides significant variations between countries where the figure rises to as high as 18 percent.

We are extremely concerned that a significant proportion of women on death row have been affected by gender-based violence, abuse, and trauma. In particular, in the case of girls sentenced to death, most known cases concern the defendant killing an authority figure in the context of child marriage and/or gender-based violence. We further emphasise that the execution of any person for offences committed when they were below 18 years of age is strictly prohibited by international law.

Under universal standards of due process and fair trial, the imposition of the death penalty is always arbitrary and unlawful when the court ignores or discounts essential facts that may have significantly influenced a capital defendant’s motivations, situation and conduct, including her exposure to domestic violence and other abuse.

Indeed, experience shows that most women and girls on death row come from backgrounds of severe socio-economic deprivation and many are illiterate, which has a devastating impact on their ability to participate in their own defence and to obtain effective legal representation.

In some countries, women have been sentenced to death for drug-related offences. Women are criminalised for drug offences at an extraordinary rate, representing around 30 percent of worldwide arrests for drug trafficking. The majority of women on death row for drug offences are poor and foreign nationals or migrants; most appear to be so-called drug mules, or street sellers. The disproportionate use of the death penalty against them reflects excessively tough criminal policies and violent public discourses in the context of the so-called “war on drugs” which involves severe and widespread violations of human rights, including torture, enforced disappearances and arbitrary deprivations of life.

In many cases, courts judge women not just for their alleged offences, but also for what are perceived to be their moral failings: as “disloyal” wives, “uncaring” mothers, or “ungrateful” daughters. Nowhere are transgressions of the social and cultural norms of gender behaviour punished more severely than in a capital trial. Further, some countries condemn women to death for “crimes of morality” such as adultery, in contradiction to the most serious crimes threshold, which limits application of the death penalty to crimes involving intentional killing. The execution of the death penalty often involves methods amounting to cruel, inhuman or degrading punishment, or even torture, such as executions by stoning. Laws and policies that provide for these penalties moreover encourage family members and vigilante groups to execute women and girls including in the name of so-called “honour”.

Women, including those serving death sentences, are also vulnerable to violence, particularly in prisons where male staff supervise them, or where prison authorities fail to protect them from violence at the hands of other prisoners. They may be shackled, including during pregnancy and labour. They are usually unable to access female-specific healthcare and necessary hygienic products. Women also suffer from isolation from their families because of the social stigma associated with their sentence, and an enduring lack of family contact.

Around the world, death sentences continue to be imposed in violation of major international standards, including the right to a fair trial and the principle of non-discrimination. The Universal Declaration of Human Rights and the International Covenant on Civil and Political Rights make clear that all people are entitled to the equal protection of the law without discrimination.

The application of death penalty against women who were children at the time of the offence, against women victims of multiple and repeated gender discrimination, including during trial, and against those whose crime fails to meet the required threshold of gravity, are all instances of likely arbitrary killings.

We therefore call on States to review all death sentences against women and girls, and to adopt gender-based responses and policies to address gender violence, biases and discrimination which characterise investigations and trials, and which contribute to bringing women and girls to death row, along with social economic and other causes or factors.

We also call on States to strictly observe the United Nations Rules for the Treatment of Women Prisoners and Non-custodial Measures for Women Offenders (the Bangkok Rules); and the revised UN Standard Minimum Rules for the Treatment of Prisoners (the Nelson Mandela Rules), which outline specific provisions concerning women, including rules on their separation from male detainees and their supervision by female staff.

The imposition of the death penalty on women and girls remains an under researched issue. We welcome the recent report by Cornell Center on the Death Penalty Worldwide, on this topic and call for more such studies into the gender-specificities of death penalty, including situations where gender intersects with other identities markers such as poverty or race.

We applaud the steadily growing majority of countries, which have completely abolished the death penalty – standing at 106 at the end of 2017. The World Day Against the Death Penalty provides a unique opportunity to recall the importance of further promoting the global trend towards universal abolition of capital punishment.

Mr. Jeremy Laurence, UN Human Rights – Media Unit (+41 22 917 9383 / This email address is being protected from spambots. You need JavaScript enabled to view it.)

This year is the 70th anniversary of the Universal Declaration of Human Rights, adopted by the UN on 10 December 1948. The Universal Declaration – translated into a world record 500 languages – is rooted in the principle that “all human beings are born free and equal in dignity and rights.” It remains relevant to everyone, every day. In honour of the 70th anniversary of this extraordinarily influential document, and to prevent its vital principles from being eroded, we are urging people everywhere to Stand Up for Human Rights: www.standup4humanrights.org