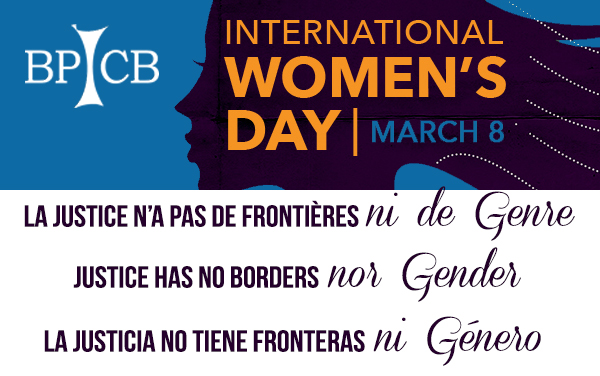 The fundamental objective of the legal profession is the defense of the fundamental rights and freedoms and the dignity of the people, among which is the effective equality between men and women.

We all have to get involved in this matter, train all generations in equality and respect for the rights, freedom and dignity of the people. In summary: Equality without limits.

On this International Women's Day, let me raise a voice for thousands, I would say, millions of women who suffer in so many parts of the world, exploitation, inequality, humiliation, violence, abuse, the most absolute contempt for their right to dignity, and the list goes on with an endless number of aberrant acts and behaviors allowed by society.

And what is worse, these acts are in most cases protected by political systems and even by aberrant interpretations of religion. Even today, in the 21st century there are many places where women are the object of public stoning. Also, countries and societies where adultery is considered a crime and women are subject to the death penalty. In Iraq, Syria or Nigeria, women and girls, are kidnapped to be exploited as sex slaves, if not tortured and murdered by criminal groups with aberrant ideologies.

Let’s raise a voice for them today. We don’t see them, but today they suffer terribly, and they are the object of rapes, murders, slavery, human trafficking, and thus an endless, as I said, of aberrations. Let’s raise our voices for them, and ask for the commitment of all, so that once and for all, women’s rights and dignity are absolutely respected all over the world.

With our daily effort and commitment, and with the dedication of the whole society, we cannot lose hope that it is possible to have a better world.